According to their own website slugline, the EMP (for Experience Music Project) is “a leading-edge, nonprofit museum, dedicated to the ideas and risk-taking that fuel contemporary popular culture.” I would note that “popular culture” here takes the shape of rock music and science fiction. Which is no surprise when you consider that the EMP is the brainchild of Microsoft co-founder Paul Allen. Truly, the place is a techno-geek’s dream. 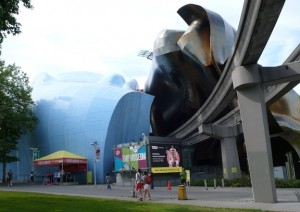 The building, designed by Frank Gehry, looks like a giant’s child peeled all the coloured foil off his Easter chocolates and tossed it at the foot of the Space Needle. The EMP website says that Gehry was “inspired to create a structure that evoked the rock ‘n’ roll experience” and used bits of electric guitars as building blocks for an early model design. I would say that some emotional inspirations resonate more successfully than others. Here, the clash and smash lacks the energy to overcome the dissonance of either the structure with itself or with its Seattle Central setting. But it does have the virtue of difference, and the eye makes of it what it will. My own eye, leaning more to the scifi end of the EMP collection, decided one bit of crumpled aluminum had something of Darth Vader’s helmet about it.

Stepping inside, I was drawn to the core of the space and a soaring funnel of electric guitars and keyboards. From there, it was an absorbing meander through the dark (conservationally prudent and also aesthetically correct) and often-winding galleries. The day I was there, the exhibits included: Spectacle: The Music Video; Block by Block: Inventing Amazing Architecture (Lego, of course); Nirvana: Taking Punk to the Masses; Fantasy: World of Myth and Magic; Hear My Train a Comin’: Hendrix Hits London; Can’t Look Away: The Lure of Horror Film; and, Icons of Science Fiction. (I think there are more colons in the previous sentence than most people use in a month)

While I made a respectful pass through the Jimi Hendrix exhibit (and was overwhelmed by a sense of my own antiquity), I was mostly there for the scifi. As you’ll note from the exhibit list, despite the Science Fiction Museum no longer being a permanent collection (how sad!), the EMP continues to maintain a significant presence in this area and to present (and grow) the Science Fiction Hall of Fame. There was a lot for me to see. Correction: for me to wallow in. The EMP is a highly-interactive experience. I pushed all the buttons in the Fantasy exhibit, mapping out a rough fantasy world on digital parchment and learning that my own fantasy archetype is “the Mystic.” I watched a few Horror film clips, then ran into the soundproof Scream booth and let one rip. But mostly I moved, in ever-increasing delight, from case-to-case, staring at costumes and props that represent entire worlds.

If you’re wondering why I’m posting about going to a museum, that’s why. That last bit. Because the EMP isn’t about “popular culture,” or science fiction or even rock and roll. The EMP is a museum of stories. So are most museums, if you look the right way and are willing to work a little. But at EMP it’s all up front: on the music side, it’s about storytellers; and on the scifi side, its all about the stories themselves. So I gawked and the stories unfolded in my memory. And I sent out grateful thoughts to all the artists whose vision and talent had built and shared these worlds, these stories. I emerged into a sunny afternoon, where it seemed only right to be staring up at the Space Needle. An icon of my generation’s bedtime story of the future, anchored to the heart of a city that itself has become iconic of the technology so dominant in the story of today.

Lori Berhon is a New-York based novelist and playwright. Her work is distinguished for its intelligence and for the vivid humanity of even her most impossible characters. She is actually taller, slimmer and far more elegant than she appears to be.
View all posts by Lori Berhon →
Tagged EMP, scifi, Stories. Bookmark the permalink.