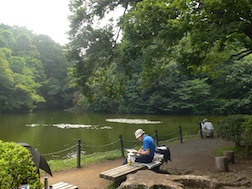 I just got out of the shower and slipped on a memory.  It’s my hot weather post-subway ritual, to cool my skin by taking a shower with Dr. Bronner’s peppermint soap and then, while still just a bit damp, wrap myself in this yukata.  For five minutes, maybe ten, I feel not only cool but also serene.  I cross the bridge from the work day to my truer life.

It’s just a long thin sheet of navy blue cotton, with an asymmetrical white pattern that mimics woodblock prints.  An ordinary summer kimono.  Very ordinary.  You could buy something like it in thousands of shops around the world, at least a quarter of which are probably named something like “Oriental Bazaar.”  In fact, I bought this one in a shop called Oriental Bazaar.  But that Oriental Bazaar was in Toyko, and that’s what makes this yukata so special to me.  Each and every time I wear this yukata, I recall picking it out from piles of similar ones at the Oriental Bazaar.  I remember that afterwards, the end of an exhausting day, my friends and I found a sushi bar near the train station, a sushi bar with a conveyor belt from which we daringly selected random plates and our conversation consisted mostly of “no, that one’s not the eel, the eel is the one on the green plate.”

On the other side of the day, before we’d ended up at the Oriental Bazaar, we’d visited the Meiji shrine.  In my memory, I see the cool silvery-brown of the Torii and can almost feel my fingers touching the wood.  I see an elegant minimalism, nature respectfully tamed by light and empty spaces.  A family, the women dressed in elaborate kimono, bringing a new born child.  And in the park, the iris garden, tortoises in a pond, and a man making his own calm in watercolour.

That same day began with my friends and I waking up on our futons in the hotel in Itzukogen.  On the way to the train, we bought hot coffee in cans at the station shop, a shop that carried everything from dried fish to Hello Kitty keychains.  Next door was the little bakery where we had not yet figured out which pastry was filled with what, but that was fine with us.  We sat in the train, sipping from our cans and eating our pastries, until we got to Atami where we could switch from the spur line to the Tokyo train.  We made this trip for six days, because wherever we wanted to go, we always had to change at Atami.  On this day, the second trip, we already felt experienced and were emboldened to walked the market for the first time and stare eagerly at everything that was on offer.  I try, but can’t remember if this was the same day we bought the white peaches that came individually wrapped in tissue paper.

This is why we call them “souvenirs”, those things we bring back from trips.  It almost doesn’t matter what they are, but the best souvenirs are the things we actually use because in handling them, we go back to the time and place when we first picked them up and we remember.

By the way, my Dr. Bronner’s is a kind of souvenir, too.  I remember the first bottle I bought, one sticky week in Poughkeepsie, my sophomore year of college…

Lori Berhon is a New-York based novelist and playwright. Her work is distinguished for its intelligence and for the vivid humanity of even her most impossible characters. She is actually taller, slimmer and far more elegant than she appears to be.
View all posts by Lori Berhon →
Tagged Memory, Travel. Bookmark the permalink.